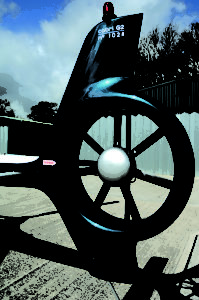 On 8th June 2018, the editor had a helicopter accident and was in hospital for 8 weeks, she is now wearing a back brace and learning to walk again. It is a long process but she will get back to full strength and hopefully be able to fly again.

She was doing a student’s test in the Cabri G2 when the accident happened. They had almost completed the test and the student had flown well. They were just doing some final engine failures in the hover when the problem arose. The first engine failure in the hover was OK, but the student felt that he had allowed the machine to go too far to the right before landing, so he asked to do one more. This was agreed.

The were hovering at about 7-10 feet facing the tower. In the usual manner the examiner called engine failure go, and was about to close the throttle when suddenly the machine started spinning left as though they were inside a washing machine. The student called “You have control” but by then both student and instructor had full right pedal, hoping to straighten the helicopter. However, the helicopter did not straighten before it hit the ground.

The examiner believes that she also noticed the machine climbing and slightly went forward on the cyclic to prevent that. This is consistent with evidence from the tower that the machine climbed to about 15 feet.

Various suggestions of why the accident happened are being considered.