Started training a new student on the Exec 90, a machine he was able to purchase for less than £30,000, which is a good price even for the Rotorway self-build helicopters. (This one was already built, as indeed most of the Rotorway 90s and Rotorway 162s are, as they are not longer possible to buy from the factory in kit form.) 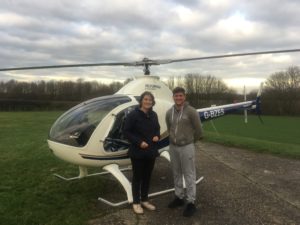 Training a new student on the Exec 90

We tested the tail belt (the tail rotor is attached to the main rotor and engine via a belt rather than a shaft, which is what more conventional helicopters use) with the specially designed gadget. The belts, only recently put on the machine, were a little loose. When belts are first put on the machine they have to be bedded in slowly, this is done by short burst of hovering, followed by checking and more hovering, three hours in total. As these were a little loose, the engineer took off the tail hub and tightened them to the correct position. They were then re-checked and found to be perfect and we were able to fly again. This can also be done by self-builder pilots, who soon get the hang of it, as it is an easy job and very quick. 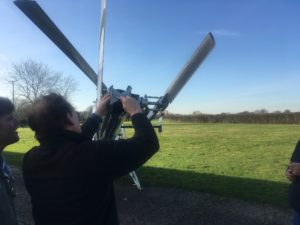