Been training on the Rotorway Exec 90. This is the oldest version of the Rotorways available in the UK, the most common is the 162F and the most uptodate is the Talon (A600). There are varying differences between the three models available in the UK but the problem with the Exec 90 is that is it somewhat powerless… which can be pretty problematic in high winds, especially when you have (as one has to from time to time) to turn downwind. 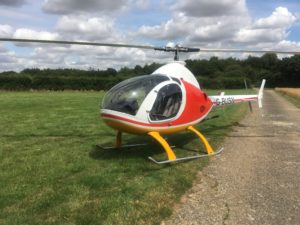 We had lots of good flying. The first day was natural Rotorway weather – light winds and moderate temperatures – perfect for a low powered light  helicopter. We did all the exercises with great panache, wonderful weather.

The next day was windier and we had to play with the up and down drafts, turn into wind when running out of power and expect to find the control column (cyclic) in our stomachs, it was a much harder environment for the student, but it worked and we were able to overcome the challenge of sloping ground, steep turns and autorotations.

Overall, though, the most important thing in the Exec 90 is throttle control, and my student was extremely good at that. Master throttle control and you are on your way to be a contented Rotorway owner.

So, a new student trained and a machine has a happy owner. The Rotorway is what it is – a low powered, cheap and kit built machine, but marvellous for the price, which can be as low as £23,000. You get what you pay for in helicopters. 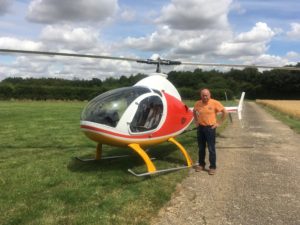